A huge thank you to all who took part or helped out with the many jobs that go unoticed which include time keeping ,registration, catering , putting up gazebos and the many other little things that made this weekend a fabulous festival. 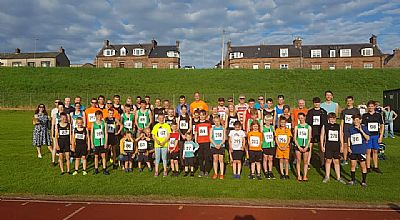 On Friday we had a record amount of athletes who registered and ran in our first event(The Magic Mile). We ran this in 3 different races according to ability and they proved to be very exciting races.

Our first event was the Tiger mile. The athletes who roared around the track and this included some very young runners who ran 800m along with the rest of the field.

In the next race we had our super Gazelles who skipped their way around looking superb with all of them managing a great finish at the line. 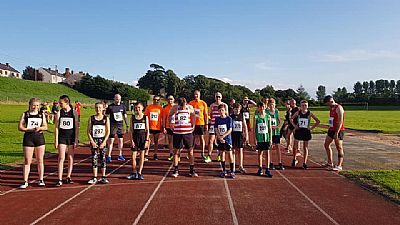 Our final race was the Cheetah race which again proved to be a very competitive race and one in which the first two athletes (Callum Waugh and Conan Harper) crossed the line almost together both managing a Sub 5 minute mile - a fabulous performance ! 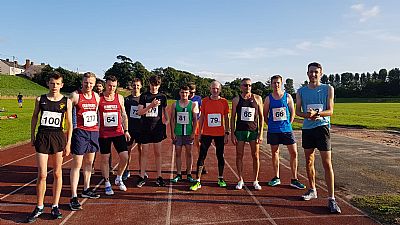 After a short rest the Cross Country event took place. We decided this year to keep the course in the Everholm as part of the path up the river is dangerous. After a grueling 3 lap course which took in the steep hill 3 times (sorry folks) the winners were together all the way round and could not be separated on the line. Well done to Alan Baxter and Colin Holden who pushed each other all the way.

After a rest on Friday our athletes were up early for the next event which was held in Gretna Green. This was a 6 mile road race along quiet country lanes heading off from the Blacksmith's Car park. The conditions were pretty warm and the water which was supplied to our runners was very welcome.

Fastest home on the day was Neil Richardson in 39:40 who is making excellent progress. Fastest lady was Liz Dawson who is getting back to some good form in 54:13. 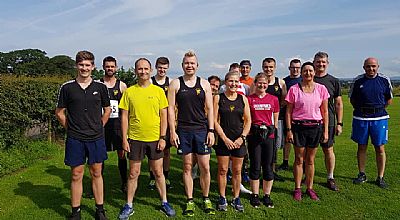 Our athletes managed to drag themselves out of bed for the last test - a 5km hill race to the top of Hind Hill in Moffat and back. The weather again was glorious and the athletes all managed up and down making light work of the good under foot conditions. Fastest home again was Neil Richardson in 27:26 with Marie Marshall giving him a good race and who was also the fastest lady in 28:43. 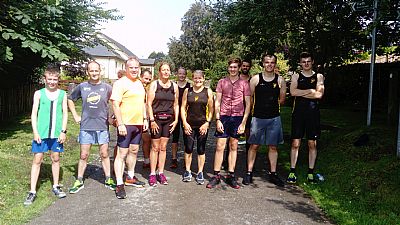 Our winners were decided on age % over the weekend meaning that everyone had an even chance of winning this event no matter what their age. 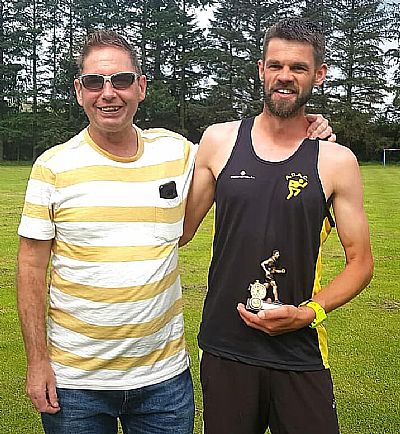 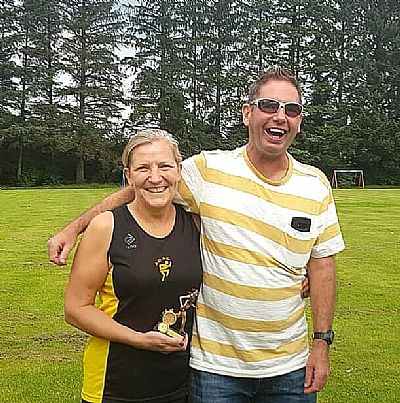 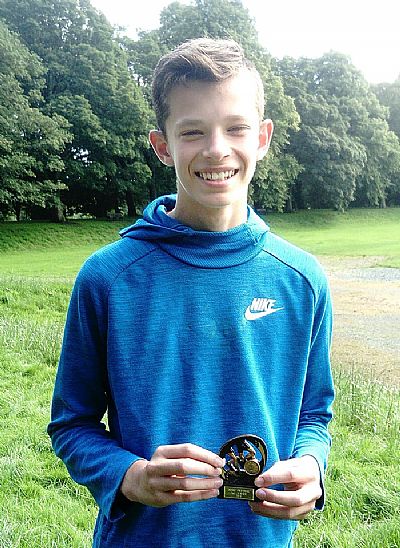 Well done to everyone and a big thank you again for making this weekend a super festival ! Same again next year ?

After 3 days of fine competition the ADAC Summer Festival is now over.

Full results can be found HERE

Our winners (pictured below) were: 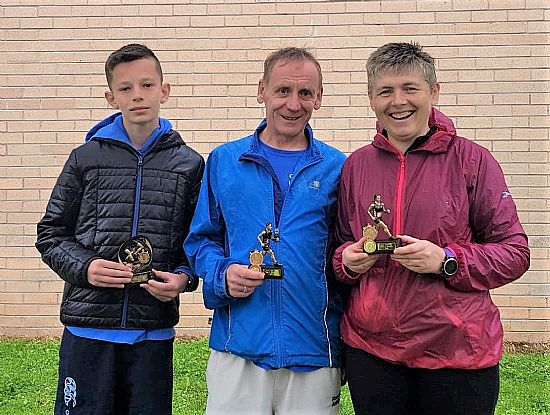 The four events held over three days were filled with exciting battles all around on the track , over the country , on the road and up a hill.

A super turnout of over 40 athletes competed in two events on  a warm and muggy Friday evening.

The first event was the "MAGIC MILE".

Each competitor who finished the mile received their medal and there were some excellent races in which athletes were grouped according to ability. 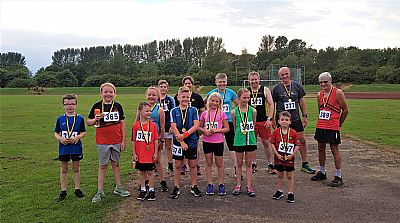 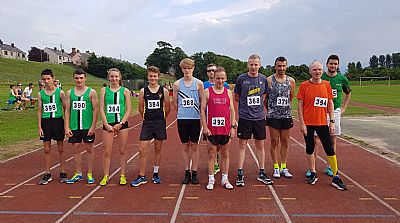 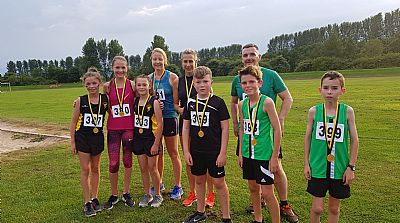 The fastest mile on the night was recorded by Ryan Heneghan in a superb time of 5 minutes flat. Athletes from age 5 to 75 competed in this event and it was great to see smiling faces at the end of each race after being presented with their well deserved medals.

EVENT No.2 The Cross country race.

After a short break the Cross Country event took place up the river and back over a course of approx 5km. The dry weather made the ground quite hard and for once trainers seemed to be the chosen footwear for the runners. Fastest home was Alan Baxter in a fabulous time of 17:33. First lady home was Donna Burnett in a great time of 19:32. 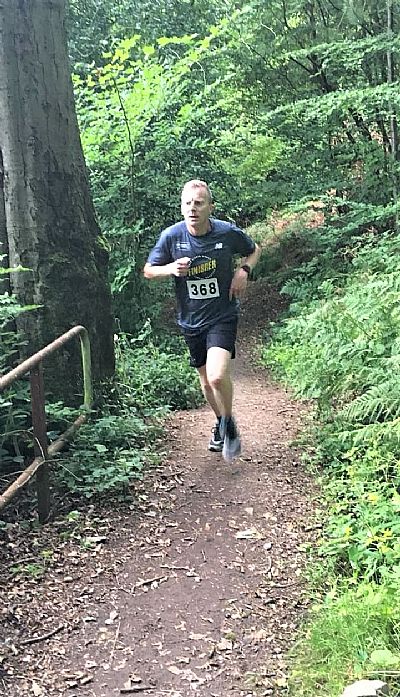 (Alan Baxter on his way up the river) 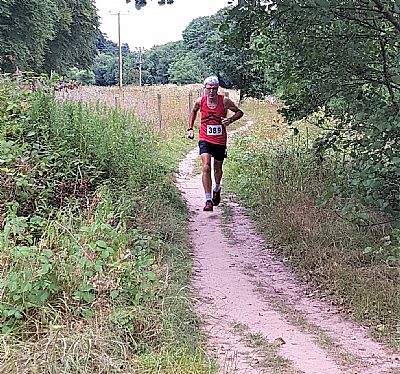 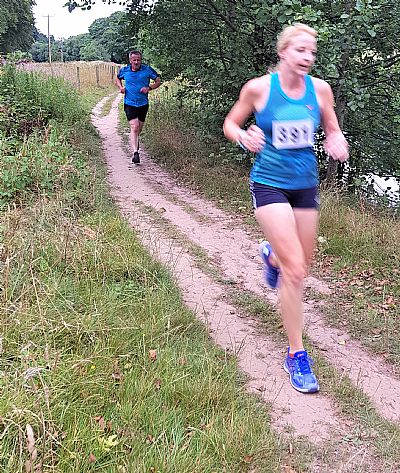 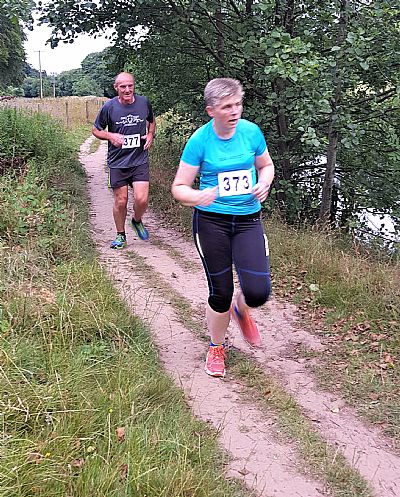 After a "rain" delayed start the 5mile road race took place on a very blustery Saturday morning with the wind proving to be a problem for all the athletes.

The winner of the event was Kevin McCaig in an excellent time of 31:28. It was great to see some guests joining us for this event especially young Jack Johnstone who almost caught his dad at the end of a very tough battle of father and son. First lady home was Marie Marshall in a superb 38 minutes dead.

The runners and helpers enjoyed a well earned cuppa afterwards. 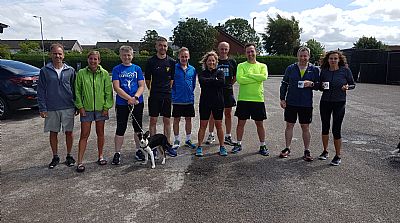 Event No.4 The hill race

Sunday morning arrived and the weather forecast was not good for the hill race.

The rain, however , stayed off for the event and the punishing weekend was almost over for the athletes who took interesting routes up the hill and down again. The fastest on the day was young Conan Harper who looked at ease on his way up the hill coming home in 27:51. First lady home was Ruth Griffith in 43:57. 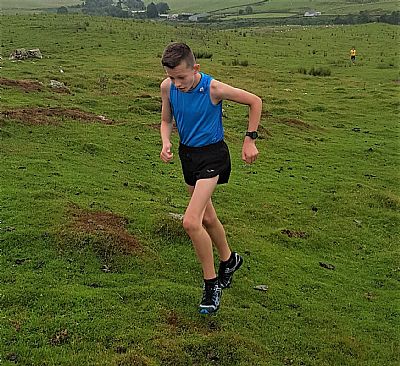 At the end of the festival all athletes and helpers enjoyed a rare and well earned feast of food. 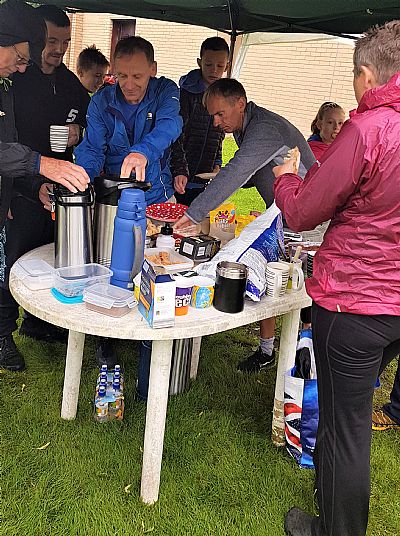 A massive thank you to all who helped make this event such a success. It was also great to have members of other clubs (Nithsdale/DRC/Dfs Harriers/Rosendale) joining us for our Festival. We hope you enjoyed the "fun" and will come back again next year.

If anyone has any feedback from the event including suggestions for next year's event please email the website below. 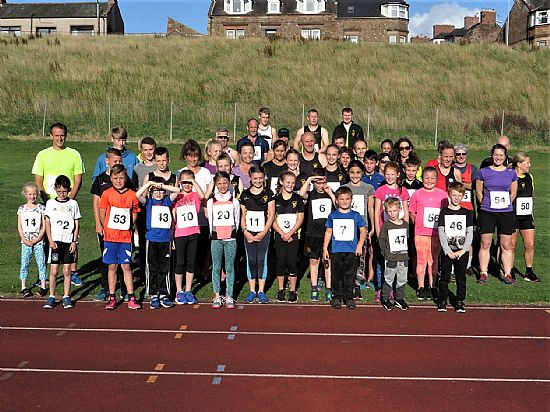 The ADAC Summer festival took place last weekend and was a huge success.

The weekend started on a sunny Friday evening at the Everholm track in Annan with some 60 athletes young and old competing in the MAGIC MILE. 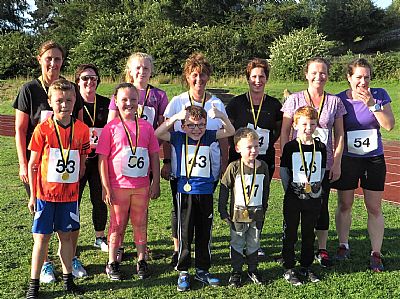 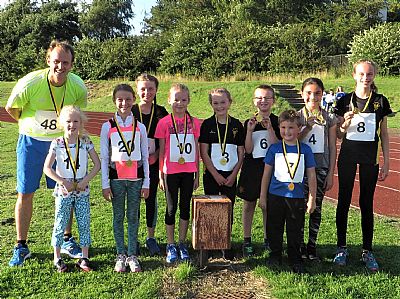 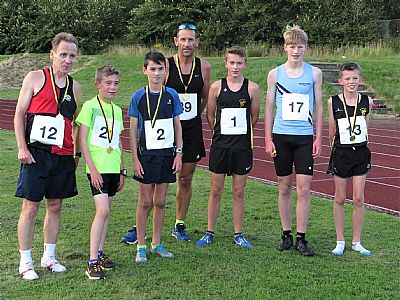 Each of the competitors received a medal for finishing and there were 4 races graded by the athlete’s predicted finishing time which saw many good battles taking place.

After a 15minute break the Cross country event (approx. 3m) started from the Everholm and continued up the river to the 2nd bridge and back. This event also incorporated a shorter course designed for the very successful Beginners group which recently took place earlier in the Spring. First home in a splendid time was Ewan Fairgreive who crossed the line in 18:13m. He was followed by Mark Whitelaw (20:21) and Kevin McCaig (21:16)

On Saturday morning the weather was not so good but dry at least and runners had to cope with a strong southerly wind as they tackled the Gretna 5mile road race. First home was kevin McCaig in 30:30m closely followed by Kevin Plummer in 31:00m and Gordon Vivers in 33:33. First lady home was Janet Priestley in 38:16.

After a 24 hour welcome rest, some 26 runners showed up on Sunday at Moffat for the final event – the Hind hill race. A short but testing route to the top of Hind hill and back into the town. First home again was Euan Fairgreive showing he has recovered from recent injury in an excellent time of 22:56m with Mark Whitelaw in 25:44 and Kevin McQueen a further 2 seconds behind. First lady home was Rosie Allen in 31:29.

The overall winner of the event was Kevin Mccaig , runner up was Gordon Vivers whilst the first lady was Liz Dawson and first Junior was Ewan Fairgreive.

Many , many thanks to all who helped in any way to make this year's festival the best yet ! Same time again next year ?

The 14th ADAC Summer Running Festival was held over the weekend 5th/6th/7th August and enjoyed good dry weather (except a small smir shower on Friday) and some great competition throughout.

32 runners in total competed in runs on the track, cross county, road and hill with 7 runners competing (if not always completing) in all four.

The winners over the weekend were: 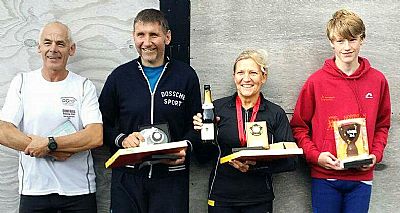 The photos show the good looking athletes prior to each event over the weekend. Results can be found by clicking below. RESULTS(excel)   RESULTS(pdf)

Thanks are due to all who contributed to the success of the weekend either through their athletic endeavour or by marshalling, catering, time keeping, scoring, cheering, filming and all the other unseen stuff that goes into a successful festival.

Mark Whitelaw proved to be the strongest all-rounder over the four events in the annual ADAC summer running festival.  The event which covers the diverse running disciplines of track, cross-country, road and hill running was once again a popular draw for runners across the region with a total of 40 individuals taking part in one or more event. 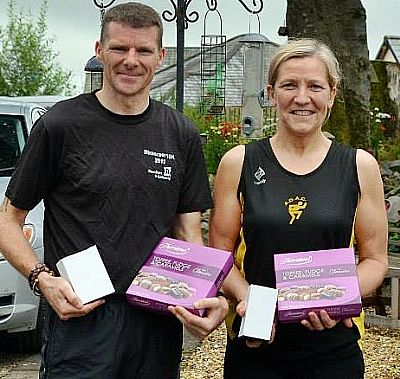 The scoring for each event is based on the age-grade system in which scores are graded against the equivalent world best time (100%) for similar aged runners.  There were a number of performances which secured 80% or above and overall the standard was very high.

33 athletes competed in the 1 mile track event (in 2 heats) which kicked off the weekend on Friday evening and the fastest time was recorded by Angus Johnstone in 4.56 mins. 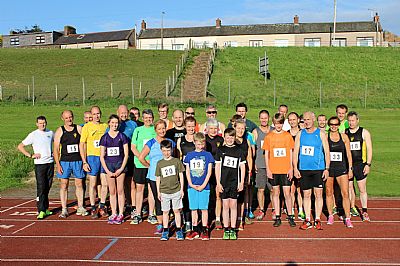 Following a short rest, 27 runners took on the 4.2 mile cross country run which followed the riverside path up to Brydekirk and back.  Whitelaw was fastest in this event in a time of 26.31 min.

Saturday morning saw 20 athletes assemble at Gretna Football Club car park to take on the 5 mile road run out to Rigg and back along the Graitney road.  Whitelaw again proved the fastest on the day with an excellent time of 28.35 mins. 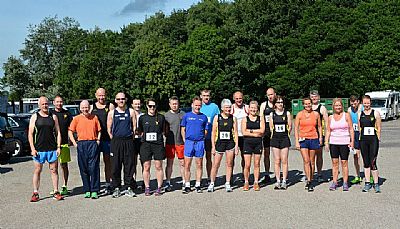 The final event was held in Moffat with a 3.1 mile run up Hind Hill.  27 runners tackled the course and again Whitelaw was the first man home in 24:13 mins. 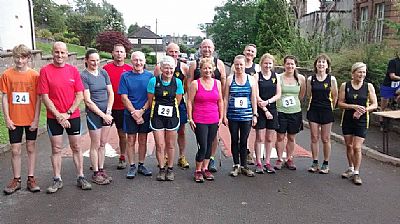 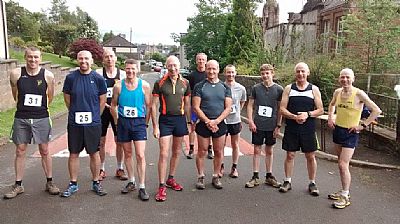 (Pic. above - final day runners take to the Moffat hills)

Once the scoring was worked out Whitelaw had amassed a total of 132 points. Gordon Vivers took second place on 121 and first lady was Liz Dawson with 110.

A total of 14 runners completed all four events which is a testimony to their adaptability, stamina and fortitude. As well as the top three the others were Jean Robson, Linda Cameron, Yvonne Kerr, Louise Hopper, Alan Creighton, John Murphy, Alan Cameron, Andy Carruthers, John Cowan, Oliver Wilson and John Minto.

A junior event with a maximum of three events to be run was also held and two runners completed the track, cross-county and hill events - Michael Kerr and Ryan Heneghan - who both deserve hearty congratulations.

Thanks go to all helpers who provided support, food and drink, timekeeping, marshalling, photography and administrative support over the weekend.