If you've got a story to tell then let us know.

Make sure it's about athletics though.

On the 27th of August Kevin and I competed in the Kong mini mountain marathon in Nether Wasdale. We set off to the Lake district at 6:30am on Sunday morning on the about two hour drive to Nether Wasdale with me taking full advantage of this to get another hour sleep. 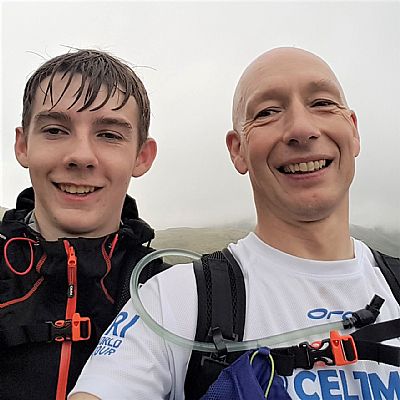 When we arrived, we registered and got kit checked before setting out on what they said was a 20-minute walk to the start but turned out to be more like 30. We stopped to meet Joss Naylor on the way and got some tips as to where the terrain was a bit more runnable. We set off on the course at 9:30 and headed into the hills as the clag started to shroud the summits. We made good progress running up the path to find the first checkpoint without a problem.

After that the going got a bit more difficult as we made a decision to climb up the steep bracken covered side of the mountain to head for another checkpoint at the top of the hill. This checkpoint proved a fair bit harder to find as the clag dramatically reduced visibility and we had to trudge along the top of crags on a bearing. By this time we had decided to put one of our maps away to save it from the rain that was still pouring down as they were proving to be not as waterproof as they claimed to be. After a mile or so going along the top we stood on a rock outcrop to peer through the clag to see if we could see the sheepfold the next checkpoint was at. Just as we were about to carry on Kevin saw the faint outline of the sheepfold just at the bottom of the slope we were on. After we bagged that checkpoint we took another bearing to the next checkpoint which proved to be relatively easy being a cairn on a westerly bearing from where we were. 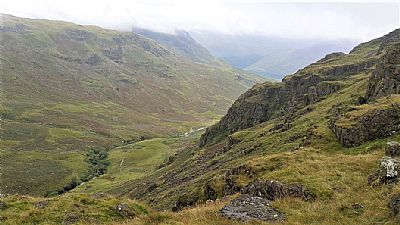 We then carried on by this time also following a runner in front of us as well as a bearing to the top of another crag. Kevin on the way down to this checkpoint took a fall with a bad landing on to a pile of rocks hurting his hip and shoulder as well as ripping a hole in his new Celtman t-shirt. But despite this we again found this checkpoint with ease and continued on to the top of our first mountain on  course we bagged our 5th checkpoint.

From there it was a speedy descent to the next checkpoint which again proved easy to find on a bearing despite later finding out a lot of others had struggled to find it . We then made a decision to make another big climb up a steep slope scrambling over rocks and boulders and for the first time used the altimeter to help us find the cairn just below the summit of the mountain. After we got that checkpoint we decided to save time we ran down the side of the path to join up with the path at the bottom of the valley and follow the stream along to the next checkpoint. This checkpoint again proved easy to find but after having ran quite a bit and had done a lot of climbing we started to slow down,  with one more big daunting climb up the steep side of the valley to our next checkpoint. 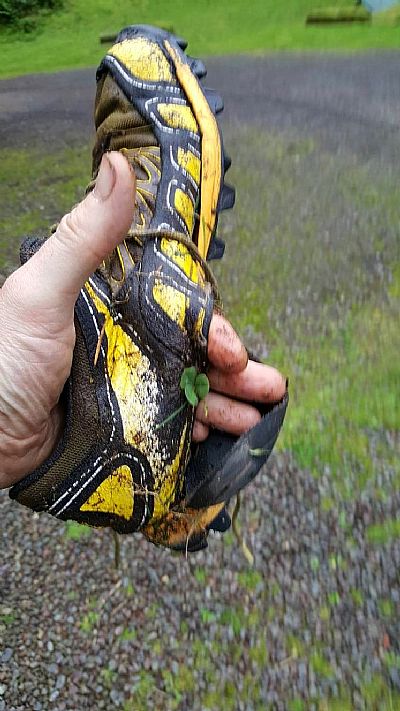 We stopped just before we got to the top of this climb to take some picture and a selfie before cresting the top of the hill. At the top of the hill we had a look at the map to see where the checkpoint was just to decide it should be where we were standing and turned around to see it hidden just behind the top of a knoll. After that the running became easier going despite the marshy ground we were able to speed along to the next checkpoint at the edge of a Lochan and then continued on to a path which unexpectedly made the running slower going and harder again as the hours of rain and the boulders scattered along the path made the way going very slippy with us both coming close to having several falls. We made another decision at the bottom of this path as to what to do as we had 30 minutes left but the nearest checkpoint would mean an over 2 mile run and several hundred metres of climbing. We decided just to continue on to the finish where we dipped our dibbers for the last time having got 290 points overall and coming in a comfortable 25 minutes early. We then made the 30 minute walk back to the registration building where we got our results with us being first out of one. However later after the 2 hour drive home more runners came in and we became second out of two but at least we were still in the top 3.

Please note that whenever you submit something which may be publicly shown on a website you should take care not to make any statements which could be considered defamatory to any person or organisation.
Back to Top
site map | cookie policy | privacy policy | accessibility statement